We get a lot of questions about using Worm Out during pregnancy, while nursing, and in infants.  Today we're going to answer the most common questions we're asked about our herbal parasite cleanse. 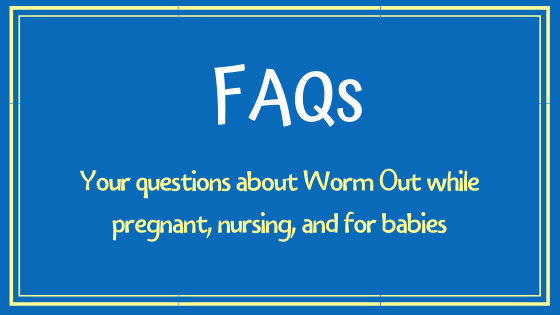 Is it safe to take Worm Out while nursing?

Many customers have done the parasite cleanse while nursing, however the one thing to pay attention to is that it could change the taste of the milk for the infant. It’s best to take it about half an hour to an hour before nursing. Introduce Worm Out in small amounts to your body and build up and see how baby adapts to taste. Most customers haven’t had any issues, however you'll probably know pretty soon after taking and you can discontinue the use if the baby doesn't like it.

Can I take Worm Out while pregnant?

Worm Out is not recommended during pregnancy.

Is Worm Out safe for infants?

We do not recommend Worm Out for anyone under 25 lbs., however if the infant is still nursing, you can introduce it to them that way.