Have you ever noticed a walnut looks like a brain? Did you know walnuts are good for the brain? What about the fact that a cross-section of carrot resembles the eye? Carrots are widely known to be one of the best foods for eye health. Wild, huh?! This is known as the Doctrine of Signatures. It is the belief that plants often resemble the body part or system that they support. 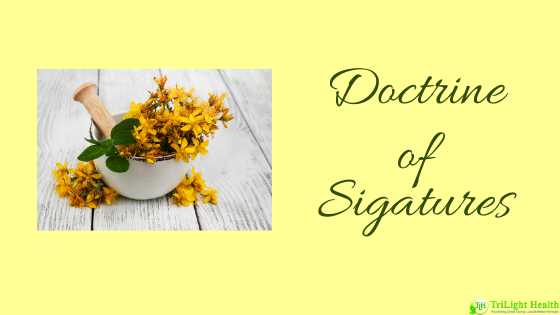 This is a fascinating concept. It is believed this is how many people began using plants and herbs before we had the world at our fingertips. The use of this concept has been documented back to the 1st century BC but it's likely existed much longer. Paracelsus was a physician who wrote in the 16th century, “Nature marks each growth…according to its curative benefit” in his research on this concept. People just observed that certain plants resembled certain body parts. The understanding of this concept has, of course, grown as our scientific understanding has grown. The Doctrine of Signatures is not applied not only based on the look of a plant but its scent, texture, and color as well.

Examples of the Doctrine of Signatures

Avocado- Resembles the human womb and has been shown to support the womb and cervix. Plus an avocado takes 9 months to ripen!

Citrus- Resembles the mammary glands and help with lymphatic flow in the breasts.

Comfrey- Leaves resemble the cells of human skin and it is one of the most commonly used topical herbs for skin ailments.

Mullein- Covered in hairs resembling the cilia in the lungs and used in many herbal cough and lung support remedies.

Nettle- The barbs on the end look like needles. The plant is traditionally used to help with ailments that have a stinging type sensation to them.

St. John's Wort- The bright yellow color reminds of us the sun and is a traditional herb for seasonal depression and other depression conditions. The extract is red and herbalists use it for blood support.

Tomato- Has four chambers like the human heart- many are read. Studies have shown tomatoes beneficial for cardiac health.

There are many more examples of this in nature. We encourage you to keep your eyes out on the clues herbs may be giving you!